In the Summer 2015 edition of Outspoken! I wrote an article entitled Disabling Architecture. I felt now was a good time to circle back to that topic.

In the Summer 2015 edition of Outspoken! I wrote an article entitled Disabling Architecture. I felt now was a good time to circle back to that topic.

The introduction to that article read as follows… “The choices by architects, interior designers, landscape designers and urban planners either empower or disempower individuals, creating an environment of inclusion or exclusion.”

I’m pleased to report that in the four years since I wrote that statement I have become personally involved with the City of Toronto’s Seniors Strategy which is laying the ground work to create a more accessible, inclusive city. And I have seen positive change.

Toronto has been recognized as an Age Friendly City. This is a United Nations, World Health Organization program that was started in 2006. The premise is that if cities are designed inclusively for older adults then everyone, regardless of age or mobility will be able to actively participate in the community.

The seven key areas of focus are:

The City of Toronto’s initiative is called “Toronto Senior Strategy 2.0” and I am on the advisory committee.

Toronto’s commitment to become an age friendly city started in 2013 when City Council adopted the “Toronto Seniors Strategy: Towards an Age-Friendly City,” also known as Version 1.0.

In 2016 the World Health Organization recognized Toronto as an Age-Friendly Community, and its status was renewed in 2018.

Version 2.0 starts out by recognizing the fact that for the first time in Toronto’s history there are more people over the age of 65 than children under the age of 15. And the over 65 population is expected to almost double by 2041.

The City of Toronto Council has made a commitment to incorporate age friendly principles into its new official plan. The recommendations in Version 2.0 reflect a wide range of goals including:

This is called aging in place. The cost of retirement home living is high, especially considering the average life expectancy is growing. It often makes more economic sense for people to modify their home, so they can continue to live there safely and comfortably rather than moving.

And when it comes time to sell a modified home, the number of potential buyers looking for an accessible home will have increased – as a result of our aging population. In addition to these buyers, the home will also appeal to individuals and families with children with disabilities.

Toronto is not alone in creating an age-friendly city. There are many cities in Ontario, across Canada, and throughout the world that are embracing age-friendly strategies. This is good news for people who will be looking to make a move in the coming years. The tide is turning for more inclusive and accessible living options.

I will post the full version of the Toronto Senior Strategy 2.0 on my website, under the NEWS tab. 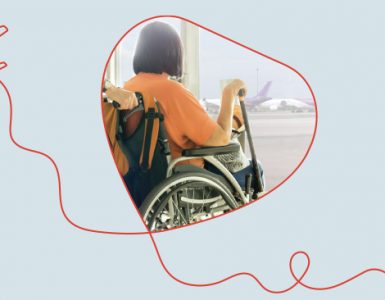 In September, disability advocate Maayan Ziv’s worst nightmare came true, when she landed in Israel with her customized electric wheelchair mangled and unusable. Imagine paying thousands of dollars and travelling many hours only to arrive at your pre-booked vacation destination and discover that a private space to bathe and defecate was not available.